Have you planted a garden so you can enjoy delicious, home-grown vegetables and later been terribly disappointed with your slim harvest?  Home gardeners make some mistakes that could be easily avoided with better planning beforehand.  In my own last-minute, small garden, I learned the hard way that no preparation = disappointment.

Anyone who has never made a mistake has never tried anything new. –Albert Einstein

Learning from the Past

Last spring, a school’s science club was selling small vegetable plants they raised, and I brought home a few to try my 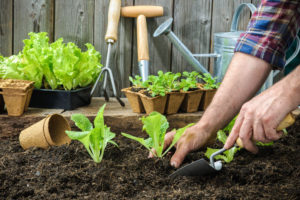 hand at gardening.  It was a spur-of-the-moment decision, and I bought several plants each of okra and yellow squash.  I also purchased only 1 of the tomato, cucumber, zucchini, and watermelon plants.  The science teacher told me that the vine vegetables would REALLY spread out in several directions, and the watermelon one certainly did.  I planted them in the part of our yard that receives the most sun, the bed where shrubs are located behind the house.  I had plenty of space there where I sometimes placed flowers.  The squash and okra did pretty well, but the others didn’t.  The cucumber and zucchini plants never produced fruit the whole summer.  The tomato plants bloomed but were slow to produce; then, they had smaller fruit than I expected. The birds look a few bites from the tomatoes.  I was so desperate for the delicious flavor of my own homegrown tomatoes that I washed them, cut away the pecks, and ate the part they didn’t touch.  (Don’t tell my husband birds had bitten the tomatoes before I served them to him!)  I will probably try gardening again by planting soon, but will I have better results?

I learned that each plant that didn’t produce fruit probably wasn’t able to exchange pollen with other vegetables of its type because I only had one of each plant.  I added one more young tomato plant, and when they bloomed, I transferred the pollen between the flowers of both plants with a cotton swab.  Thankfully, the tomatoes began appearing.  I never planted more of the cucumber and zucchini plants, so I dug them up and threw away the vines.  Simplifying seemed like a good move since I was new at watering and weeding around vegetables. 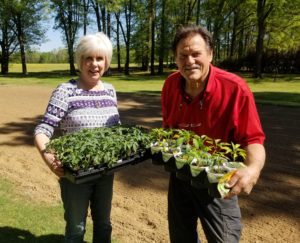 I certainly should adopt as my home gardening mentors my neighbors down the street, Bob and Judy Smith, who have a very successful garden every year.  Their summer harvest provides them with tasty produce they put away to enjoy all winter.  Judy told me they don’t consider themselves to be experts, but that their success has come simply from trial and error.  The couple highly recommends a soil test before planting to discover what the soil lacks.  Bob believes the key to a good harvest is his soil preparation.  During April each year, he tills in composted, crushed leaves he saved from the year before, along with lime and Triple 13 fertilizer, and goes over the ground at least three times until the texture is fine.  He said they make sure to rotate yearly the placement of row plantings of green beans, squash, tomatoes, purple hull peas, cucumbers, radishes, bell peppers, and onions in order to meet the varied needs of each vegetable and avoid soil nutrient depletion.  The Smiths also changed their way of watering their garden.  They discovered that their plants lasted longer when they began watering by drip hoses which deliver a little water at a time to the soil surface; this way, water doesn’t stand in pools or run off.  Bob said this method keeps the moisture from staying on the plants’ leaves, which can cause disease.

Over or under watering is a common problem for beginner gardeners like me.  But how can we get it just right?  I 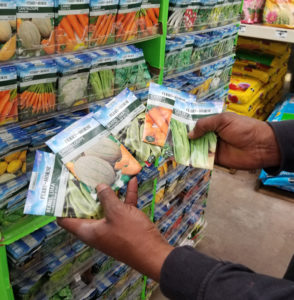 asked Tate County, Mississippi Extension Service Agent Tarah Ferguson for her professional advice, and she said that usually 1 inch per week is about right but to be sure to increase it during the hottest part of the summer.  She said that over watering and over fertilizing are reasons many gardens fail.  But the biggest problem this year has been the late spring, she explained, with farmers and gardeners eager to get seeds and plants into the ground as soon as possible.  Tarah said the soil temperatures have been lower than usual due to recent cold weather, and soil should be at least 45-50 degrees at planting time.  Like the Smiths, she urged gardeners to be sure to get a soil sample tested before planting so the soil additives chosen will be the right ones for the right job.  That’s easier to do than I thought!  To learn how to get your soil evaluated, follow these easy steps:

I believe that my garden last year would have been more successful if it had received more direct sunlight.  Tarah recommended planting in an area that gets 8 hours of sun.  She said that if the vegetables are not too far from the house and close to the water faucet and hose, gardeners will check the area more often to provide watering, weeding, insect/animal control, and harvesting.  Here’s another link she shared as an excellent resource for home gardening:

Don’t be afraid to make mistakes! 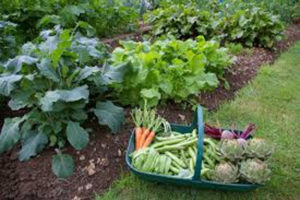 Your gardening adventure can begin now!  I found that growing and eating your own food is really fun.  The path to reaping your crop all summer begins with starting immediately so you’ll have fresh vegetables by mid-June.  Do like I did and drive around your neighborhood to find a family who has a garden underway.  They’ll most likely feel complimented by your taking notice of their endeavors and happy to answer your questions!

Many churches are welcoming homosexuals to attend services.  Shouldn’t we only invite people who are living the way God wants them to live?

Question:  Many churches today are welcoming homosexuals who want to attend their services.  Shouldn’t we only invite people who are living the

Does the Bible tell the future?

Question:  Does the Bible tell the future? Answer:  We take in a lot of information each day, thanks to the Internet. We

Does God weigh the good and the bad I’ve done to decide whether I get into heaven?

Question:  Does God weigh the good vs. the bad I’ve done to decide whether I get into heaven? Answer:   You may be

Do miracles still happen today like in the Bible?

Question:  Do miracles still happen today like in the Bible? Answer:  God always hears our prayers when we ask for His help.

Does the Bible advise us in any way about voting for people in elections?

Question:  Does the Bible advise us in any way about voting for people in elections? Answer:  Even though the Bible doesn’t refer

Will gay and lesbian people go to heaven?

Question:  Will gay and lesbian people go to heaven? How could a loving God send them to hell if they might have