Mulch or Pine Straw? The Pros and Cons

New bedding plants are beautiful, even exciting to add to our landscape, but we must remember what sets them off and really makes everything get noticed:

The mulch, the quiet hero of our landscape plan.

Shrubs and other plantings stand out so much more when framed by a fresh, even layer of pine straw, wood mulch, or 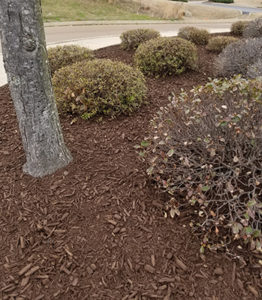 stones.  Professional landscapers and homeowners make an important decision twice yearly, usually during the spring and the autumn, about which product to select for arranging around shrubs, trees, and plantings.  I realized there are pros and cons to each of the materials available.  So, I offer to you this rundown on factors to consider. 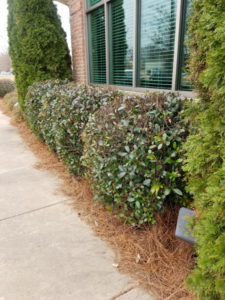 I’ll begin with this one, my favorite.  I like the way it looks, it’s longevity, and, importantly, it’s free!  I have many pine trees and begin collecting it off the lawn during the fall. It rains down from the trees from October to February.  If I don’t escrow some for use now and for later (stored in piles behind the tool house or in large leaf bags), our lawn service mows over it in the spring, and it disappears into a finely chopped dust across the grass.  Another positive aspect of the pine straw is that it usually doesn’t wash away during heavy rains.  It keeps the soil from drying out during hot weather and inhibits some weed growth. In winter weather, it insulates the soil and roots of plants from the harsh, drying effect of winds, ice, and snow.  I like that I don’t have to remove last season’s straw before adding more to the surface.  Pine straw is acidic, which benefits gardening favorites such as camellias, azaleas, magnolias, boxwoods, hollies, junipers, and hydrangeas.

Here’s equal time for any possible downside of pine straw.  It doesn’t completely discourage weeds, but no other mulch does, either.  Some say that it’s more work for them to pull weeds up from their roots through the straw than in wood mulch.  We hear that ticks like pine straw and congregate there.  But according to pest control experts, insects love any mulch.  Bugs find it’s cooler and moister under mulch during hot weather and warm and cozy during cold periods.

Shredded hardwood or pine wood mulch is the favorite of many homeowners.  Some say they switched from 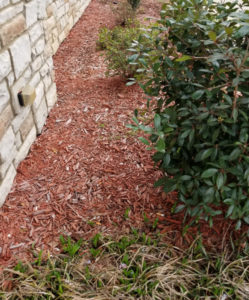 pine straw to wood mulch because they liked the color and texture better.  I recall a funny incident at my mother’s home after I’d added yellow flowers and about 10 bags of the deep brown, almost black hardwood mulch to the beds closest to her front and back doors, where I thought the colorful contrast would make a beautiful impact.  After a week, Mom said it was no longer as pretty because the mulch had lost its deep shade of brown, and she remarked that its odor had been terrible!  I explained that as the mulch’s surface dries out, it becomes a shade of lighter brown.  I promised her that the strong scent would soon subside, and it did.  After that, we used pine straw contributed by her trees for the mulch. (Side note:  It DOES stink, but you get used to it for the first few weeks of the odor, which lessens greatly.  Wood mulch is so attractive that it never bothers me anymore!)

Most people prefer the natural, brown wood mulch, but some like the reddish-orange or black mulch.  This wood product has been dyed, and its suppliers claim the dye is non-toxic to plants, including vegetable crops.  I read that carbon is used to color the wood mixture black and rust (iron oxide) for the orange, and that these are not considered harmful.  Aside from dyes, mulch can sometimes have chemicals left over from reclaimed or recycled wood’s previous lives as crates and other structures.  For safety, you should check with the store to make sure that raw wood was used to create the mulch, not chemically-treated or preserved wood.  One homeowner told me that, at first, rainfall spread a trail of rusty color from his new orange mulch across his driveway, but he was able to wash it away.  On a positive note, properly manufactured hardwood mulch releases alkaline benefits to soil as it decomposes, raising the PH level a bit. It breaks down quicker than pine straw, so it seems to not last as long.  Like pine straw, wood mulch insulates soil during cold temps and cools it during the summer heat.  It preserves moisture in the ground so you don’t have to water as much.  Weeding can be a little easier when you don’t have to push aside any straw to pull unwanted plants up by the roots.

I used these as my first mulch when I became a homeowner many years ago and was very disappointed when a heavy rain washed them across the grass and sidewalk.  That was my last nugget year.  On the positive side, they don’t break down as quickly as other mulches, which means they could last longer.  However, they don’t insulate soil and preserve moisture as well and sometimes pack down so tightly that not much rain can’t get through to plant roots.

I feel about the same about gravel as I do about wood nuggets.  I’m not a rock person, but I wouldn’t totally 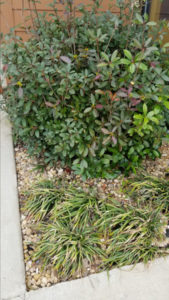 discount the benefits because they do have their place in lovely landscapes.  They can be an asset in high foot-traffic areas.  I like them around flat stepping stones.  I really admire large stones as a groundcover or liner in areas which are prone to drain and wash out during rains.  They prevent further dirt erosion, don’t wash away, and usually stay where you put them.  I see stone groundcovers often in commercial landscapes.  The rocks look kind of hot during the summer, and I wondered if they build up heat and dry out the stems and leaves of nearby plants.  Maybe they’re better as companions to shrubs than near flowers.  Stones appear to conserve soil moisture (until it gets really hot in direct sunlight) and prevent weed growth, if they’re applied thickly enough.  Our son and daughter, who live in Nevada, have front yard plantings that are set off in small white gravel, and it works very well with their drought-hardy shrubs in that hot, arid climate.

I’m referring to aged grass clippings, dried plants, and crushed leaves.  These can be great soil conditioners, but they vary in texture and are not as attractive to me due to a lack of uniformity as a ground cover.  Because of their rich content, they encourage weed and grass growth on the soil surface, but that’s what fertilizers are supposed to do.  I would take advantage of these soil vitamins by working these into the soil before adding the mulch on top.  By the way, I don’t use grass clippings because I don’t want any of its seeds to germinate among my plantings.  I have enough trouble already keeping the grass out.

Final Thoughts – BEFORE You Mulch 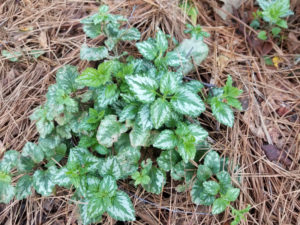 As you can surmise, mulch selection is a matter of personal preference.  Each material has its advantages and disadvantages.  A helpful tip to remember is that before you spread any type of mulch, take the time to amend your soil with things to keep plants nourished during the growing season, like compost, and a little store-bought fertilizer.  Some people like to add black plastic or landscaping fabric to the ground before piling mulch on top.  Their good intention is to suffocate weeds, but plastic doesn’t allow the plant roots to breathe and receive much water.  If you use the plastic, punch holes in it.  Unfortunately, the holes will allow in weed and grass seeds along with the rain you really need.  Finally, make sure mulching materials are not touching plant stems, trunks, or the wood on your home.  Besides trapping damaging moisture, this promotes insect infestations, including those we fear the most – termites!

Does God still speak to people like He did in the Bible?

Question: Does God still speak to people like He did in the Bible? Answer: Yes, He certainly does! Sometimes, we don’t recognize

Is it true Jesus won’t accept me if I don’t forgive people?

Question:  Does the Bible really say that Jesus won’t forgive me of my sins if I refuse to forgive other people?  Answer:

What should I consider in selecting a church to join?

Question: What should I consider in selecting a church to join? Answer: People look for many different things in a church. Each

How can I tell if God is really speaking to my mind or whether I’m hearing my own emotions?

Question:  I’ve heard that I’m supposed to ask God for help before making important decisions.  How can I tell if God is

Times are hard! What could God be thinking?

Question:  Our family has been through illness and a loss of income during the past year.  I’ve gotten a new job that

Do other religions not believe that Jesus ever existed?

Question: What do other religions believe about Jesus? Do they not believe that Jesus ever existed? Answer:  Few teachers of other world