ANTS! Looking for food in all the WRONG places (my house!)

‘Tis the season for ants and other insects to invade our homes in search of a meal.

I hate to tell you this, but it gets worse before it gets better! 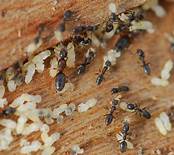 As I write, it’s the first week of June, and ants have arrived in my kitchen, bathroom, and garage.  I placed liquid ant traps in those locations, and by the next day, those ants had brought A LOT more friends.  It was scary!  A minute ago, I took a break from typing to go and stomp more that were crawling away from my ant traps and across the floor toward my bedroom.  This has been going on for several days.  I thought it’d be better by now, but it’s not.  I became discouraged with products I bought and was desperate for relief, so I phoned my pest man.  He arranged for someone from his company to spread bait-poison granules around the perimeter of my house.  He said it was good that I put out the ant traps I purchased, but that we needed to tempt the ants with bait before they entered the house.  He had a wealth of knowledge and experience, so I wanted to share it with you!

Why are so many ants (and other insects) coming in right now?

I asked if the heat, humidity, and recent rains have driven more ants than usual into our houses.  My pest control advisor, who is a licensed professional, answered: “Ants getting into homes usually begins in March but was late this year due to the long, cold spring here in the South.  This lasts until sometime in June, when ant reproduction is underway.  Termites swarm at this same breeding time.  Brown recluse spiders are also active now through the fall.  Ants, like the others, spend more time out of the nest right now mating and eating.  Homes attract ants because of spilled food crumbs and drink residue on surfaces.  Regarding the frequent rains we’ve had lately, ants are attracted to low, damp areas during the day where they can take shelter under leaves.”

Taking matters into my own hands. 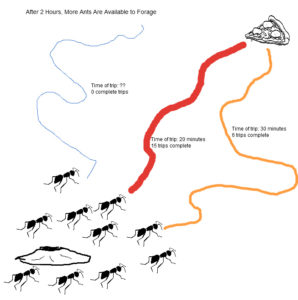 I understood why ants were drawn to my kitchen, but I was surprised to find them in the bathroom.  There was certainly no food there.  Knowing they live in the dirt, I identified the entry areas under an inside window and placed my bait traps there near the bathroom sinks.  When SO MANY MORE ants were present the next day, I decided that luring them inside to that area MUST NOT have been such a good idea, after all.  I moved the traps to the flower beds outside the walls so that the ants would find their poisoned food there in the yard rather than inside my house.  I told my pest man what I’d done, and he said that was not a good move at this point.  He said the ants had already left their pheromone trail to the food source in my kitchen and bathroom, and that they’d continue to come inside to search for that food they’d been promised by the other ants’ food paths.  Then, since the traps were no longer there, they’d venture further into our house to find them.  He advised me to put some new traps back in the spots where the old ones had been in the bathroom so that the new ant arrivals would stop at those traps.  He said, “I know you don’t like the idea of attracting ants inside, but these traps will occupy them and eventually kill them as they follow the trails of the first ants.”

I learned how bait eventually kills the entire colony.  When an ant enters the house and locates a food source, it leaves a pheromone trail to guide other ant workers in the same path towards food.  Other worker ants follow the trail and locate the bait.  They can’t digest the food, so they take the food back to the ant colony outside, under the ground, and feed it to the ant larvae.  The larvae regurgitate the food for the workers and queen to consume.  This shows why baiting with a slower-release poison is so much more effective than just killing 50 out of a thousand in the colony with a poison spray.  It actually eliminates the source where breeding takes place.  Just look outside for the ant trail on the exterior of your house to know the best place to put the bait.  Spreading baited poison powder or granules on the ground outside kills both ants AND roaches!  The waiting for the colony to die is frustrating as you continue to see ants coming and going.  There’s no quick fix that really works completely to eliminate the source of the problem. However, I did allow the pest man to spray some poison in a 3’ by 3’ area of the floor and baseboard in the bathroom where the ants were entering under the wall, and they were almost completely gone by that night.  We left the baited traps there in case others came in to forage for food.  The next morning after the granules had been spread outside and part of the floor had been sprayed, there was a huge reduction in the number of ants making it into the house.  I prefer not to use poisons in the house, but it did work very well.  You get to that point of compromise!

I’d never heard before that not all ants are breeders, only the ones with wings.  I didn’t see any like these, but the wings sometimes come off as the ants squeeze through cracks to get inside a wall.  Those still reproduce, though, outside the colony, and begin their own mounds.  Colonies split when the ant population expands.

Are the poison granules safe to use so close to the house?

My concern was for our 3 outdoor cats and my small vegetable garden in the flower bed about 10 feet from the house.  The pest control expert said the granules were only bait, and the chemical was not harmful to humans, crops, or our animals.  Even if the rain washes the grains closer to the vegetables, they would not pose problems.  Speaking of the rain, he said a little rain wouldn’t decrease the effectiveness of the ground treatment, but it’s good to put them out when rain isn’t expected for several days.  He said it only takes a day or two for the bait to do its job.

The end IS in sight.

The pest control manager had assurances for me: “This ant problem probably won’t last long if you take the right measures to kill the entire colonies where breeding takes place.  It won’t happen overnight but takes 1-2 weeks to kill the colony. I know people get fed up with ants and want to run out and buy poison to spray.  But if you’ll be patient and wait, they will die.  Put the granules outside so that they’ll stop at that food source in the future and possibly not decide to enter the house.”  Surprisingly, he told me that the larger the colony, the quicker you can destroy it; it will have more worker ants to deliver the bait underground.

Different plans for next year…

I wrote on my calendar for next year to call for a perimeter treatment in early March!

I asked if we could somehow erase the pheromone trail left by this year’s ants so that new ones won’t follow the same path into our walls next spring.  He said that there is a product to spray, but he doesn’t recommend it.  It just moves the ants over a little to try a parallel path into homes.  He said a bait works better to lead them to places where the bait will be, and they’ll all be destroyed.

Don’t’ forget the ant mounds in the yard. 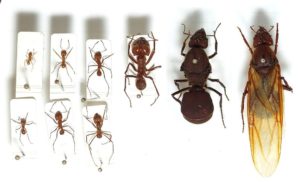 The mounds we’ve observed around the yard since winter were created by different ants called fire ants.  Their life cycle is the same as the smaller ants, but the treatment is the same. Some people try remedies like pouring gasoline or a chemical into the mound, but I use store bought fire ant granules, with pretty good success. The mound takes 1-2 weeks to die, although a few escape and migrate away to begin new mounds, which is troubling.  I wondered if the product I’d used was not effective or if I should have applied more to the mound.  Should I have watered the grains after I applied them, as some products stated?  Here’s what my pest advisor answered: “Look at the product’s bag and see if it’s only a bait or a poison. If it’s a poison, all it does it move the ants.  The queen could be as far as 10 feet underground, and she will move the colony a little distance away.  We recommend a product called Extinguish, but use only a few tablespoons around the mound; don’t sprinkle it on top of the mound or disturb it in any way.  When you disturb them, they go into a defensive mode of biting and running away from the poison you wish for them to hang around and eat.  Expect for this to take at least a week to work.”

Do you have a successful way to deal with ants inside or out? What have you tried that has worked or not worked?  Please leave a comment and let us know!

Can a person wait until he is on his deathbed to accept Jesus and go to heaven? If so, is this fair to other Christians?

Question: Can a person wait until he is on his deathbed to accept Jesus and go to heaven? If so, is this

Does God punish us for the sins of our parents?

Question:  Does the Bible say that God will punish children because of the sins of their fathers? This doesn’t seem fair. Answer:

Many churches are welcoming homosexuals to attend services.  Shouldn’t we only invite people who are living the way God wants them to live?

Question:  Many churches today are welcoming homosexuals who want to attend their services.  Shouldn’t we only invite people who are living the

Does God expect us to forgive and forget when people treat us wrongly?

Question: Does God expect us to forgive and forget when people treat us wrongly? Answer: An expression we hear often is to

How can I know whether a church is teaching the Bible’s truths and not people’s opinions?

Question: How can I know whether a church is teaching the Bible’s truths and not people’s opinions? Answer: In this day of

Is it true that God won’t give you more than you can handle?

Question:  Is it true that God won’t give you more than you can handle? Answer:  The passage from the Bible you are