Your Lawn: Keeping an Eye Out for Trouble 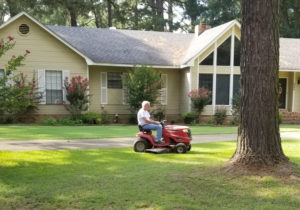 If you’re a recent home buyer, you may not realize that there’s more to maintaining a lawn than just the mowing.  Issues arise throughout the year, such as grass diseases and animal invaders that can quickly spoil the look of your freshly cut yard.  Thankfully, there’s help nearby!  I’ve found that a great place to go to with my lawn issues and questions is my local Co-op.  Among the many products they offer for sale for both farmers and homeowners are plants, boots, fertilizer, seeds, poisons, and animal food.

Everyone there – from the people behind the cashier’s desk to the manager, was very interested and helpful 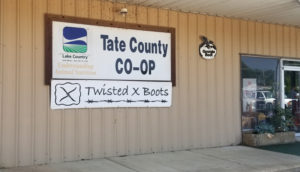 when I stopped by last week with some questions.  Marion McLeod, of the Tate County Co-op in Mississippi, shared his knowledge and experience with me on questions that the public brings to him year-round.

During the seasons in which grass is growing, you’ll notice that some areas look healthier than others.  Why is this?  Is it a sun or shade issue?  A lack of water or too much?  A remedy could be to fertilize at the beginning and throughout the growing season. 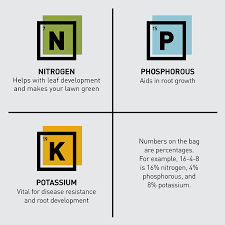 McLeod explained that a product with high nitrogen content helps the top of the grass or leaves of the plants to grow.  He said a slow-release fertilizer like 15-5-10 is used often.  Fertilizer formulas are labeled in the order of their 3 vital nutrients, nitrogen, phosphate, and potassium.  In fall and winter, nitrogen is not recommended because it would encourage above the ground growth while the grass is in its dormant stage. In the fall, a fertilizer with phosphate and potash, the second 2 numbers in the formula, would nourish roots and stems to strengthen and spread them for the next growing season.

Ridding the Lawn of Pests 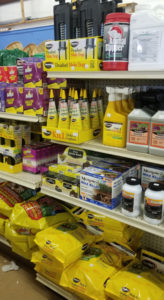 Have you seen areas of lawn that are brown, even though you know that the grass has received enough water?  Grass and crop pests like armyworms could be the problem.  McLeod recommended using a pyrethroid product, which also kills fleas, fire ants, ticks, and spiders.  “Most people don’t notice the damage until it’s well underway, with the large worms visible. Worms eat the green leaves down to the bare stems. The products won’t kill the larger worms, but the smaller ones will die, which helps stop the reproduction. The first place you notice them is crabgrass; they love it and go after it first.”  I felt that it’s too bad the worms only eat the tops of crabgrass and don’t kill it!  In my flower beds, it’s a hard variety for me to pull up by hand.  I usually have to get the shovel to dig it up; even then, I seldom get all the roots.  So, it returns the next year, if not sooner.

Other common pests in our yards are voles and moles.  We know they’re present when unsightly dirt 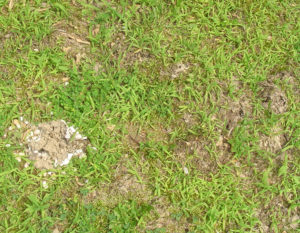 tunnels appear and push up the grass.  Our family’s three cats take care of most of these because they love to dig out and consume these little rodents.  About 25 years ago, though, I made a tragic mistake in applying a product known as poison peanuts in some mole tunnels around the backyard.  The product worked as it was intended!  A poisoned mole crawled out of a tunnel to die, and our beloved cat, Sofie, ate this slow-moving target.  Sofie died before the day was over.  So, don’t use poison in your mole and vole tunnels if there are pets that might happen by. 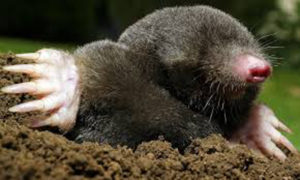 McLeod responded: “Our store has traps you can set to catch moles, and there are repellents, too, that don’t kill but will move them to other areas.  We have smoke bombs for the tunnels, although the smoke is toxic; so are the poisoned plastic worms.  Some people just use non-toxic repellents, like castor oil pellets.  The oil gets on the vole and mole fur, which repels them.  Solar sonic spikes and small windmill devices can be used, which vibrate to annoy the pests and move them away to other areas.  Moles are churning up the yard to locate food, such as grubs, so you can apply insecticide to kill this food source.  On the other hand, voles are seeking different food.  They use some mole tunnels to reach the roots of plants because they prefer to eat vegetation.  Voles love to live under mulch, landscape fabric, rocks, and concrete flower bed borders and eat flowers you set out for the season, along with perennials like hostas.  They can pull down the entire plant and consume it in no time.  My wife recently requested that I catch and bring home a snake and place it next to the vole and mole tunnels.  We haven’t seen the snake again after I let it go, and we hope it will solve our problems.  The voles reproduce several times in a season and can become a real nuisance.”  McLeod said you can use glue board traps to catch voles, but they get wise to these quickly and avoid them.  I told him my curious cats would just get stuck to these and make a mess!  (This has happened before in my house when a cat got stuck to a glue trap under the sofa.  It was traumatizing to the frightened cat and uncomfortable to the person who had to pull it off the cat very slowly while being clawed and bitten repeatedly!)

Fungus damage is another problem that appears as unsightly brown spots after frequent rains. This menace doesn’t usually kill the grassroots but does ruin the foliage for that season.  The problem starts as a spot and enlarges in a circular pattern. Fungicides are available to tackle this problem.

The spring is the ideal time for an application of a pre-emergent herbicide to kill weeds as they germinate. 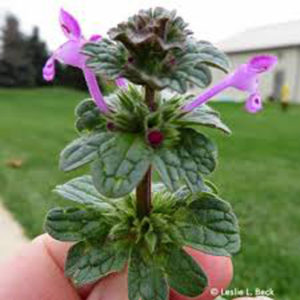 If there’s a lot of rain, you should reapply, as professional lawn care workers do.  McLeod advised that a pre-emergent product will often last until September.  In the fall, applications will help to deter those annoying late fall/early winter weeds like henbit (AKA “rooster heads”), poana weed, wild geranium, and dollar weed. 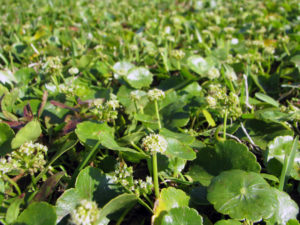 I asked him about the dollarweed vine (Pennywort) that’s invaded grass in my yard and seems impossible to get rid of.  “Every season, you’ll have to reapply Certainty herbicide to create a barrier to prevent further spreading.  Follow the mixing instructions for this concentrate.  If you overdo it, you’ll damage your grass.  Apply when rain is not expected for a few days.  When you’re walking with a hand sprayer, it’s common to spray too much on an area of weeds you really want to kill.  You’ll know you’ve sprayed too much if the poison is running off the leaves. These poisons, including Roundup, have a residual effect. Many of us unknowingly get it on our shoes and track poisons into areas we didn’t intend to kill.  Then we see the grass dying several days later and wonder if there’s a disease to blame.”

Whether you care for your own turf or contract with a professional lawn service, there’s plenty of advice available today to help you catch problems before they get out of hand.  In addition to your local Co-op, you can contact your state extension service, which has online articles posted that cover many interesting topics. Here’s a helpful link: 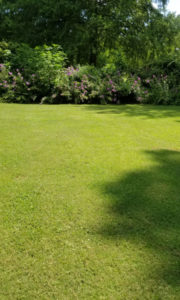 Is there any proof that Jesus was resurrected from the dead? Where is Jesus now?

Question:  Is there any proof that Jesus was resurrected from the dead?  Where is Jesus now? Answer: The resurrection of Jesus Christ

Does the Bible tell us that God approves of all religions and are accepted by Him?

Question:  Some people today accuse Christians of being intolerant of their actions and beliefs, but aren’t Christians supposed to stand up for

We try for years to get a good paying job so we can earn well. Did Jesus say that it’s wrong to desire a lot of money?

Question:  We try for years to get a good paying job so we can earn well. Did Jesus say that it’s wrong

Does God tempt me to see if I’m good enough to go to heaven?

Question: Does God tempt me to do wrong just to test me? Is that how He decides whether I’m good enough to

Some people claim to be Christians, but they sure don’t act like it. How can they go to heaven when they don’t live the way the Bible says that they should?

Question: Some people claim to be Christians, but they sure don’t act like it. How can they go to heaven when they

Does God send tornadoes, hurricanes, and earthquakes as punishments to evildoers in the world?

Question:  Does God send tornadoes, hurricanes, and earthquakes as punishments to evildoers in the world? Answer:  After such tragedies, we ask, why?